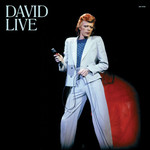 'David Live' was David Bowie's first official live album. Recorded during the first leg of Bowie's 1974 US Diamond Dogs tour, the album was recorded in Philadelphia just as Bowie was experimenting with Philly Soul sound that would eventually lead to his 'Young American's album.

'David Live' captures Bowie in his transition from Ziggy Stardust / Aladdin Sane glam-rock to the 'Plastic Soul' of the 'Young American's era.

Side B:
Changes
Suffragette City
Aladdin Sane
All The Young Dudes

Side C:
Cracked Actor
Rock 'n' Roll With Me
Watch That Man
Knock On Wood

Side F:
The Width Of A Circle
The Jean Genie
Rock 'n' Roll Suicide