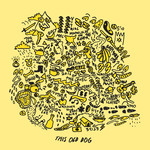 It was a little space-in time, location (he moved from Queens to Los Angeles), and method-that inspired DeMarco while making This Old Dog. Arriving in California with a grip of demos he'd written in New York, he realized after a few months of setting up his new shop that the gap was giving him perspective. DeMarco says, "I demoed a full album, and as I was moving to the West Coast I thought I'd get to finishing it quickly. But then I realized that moving to a new city, and starting a new life takes time. Usually I just write, record, and put it out; no problem. But this time, I wrote them and they sat. When that happens, you really get to know the songs. It was a different vibe."

DeMarco wrote some demos for This Old Dog on an acoustic guitar, an eye-opening method for him. "The majority of this album is acoustic guitar, synthesizer, some drum machine, and one song is electric guitar. So this is a new thing for me."

And right from the offset, from the pops and clicks of the CR-78 and acoustic strums on the album-opening "My Old Man," and the synth-drenched beauty of the second track, "This Old Dog," it's clear that DeMarco's bag is filled with new tricks indeed. This Old Dog is rooted more in a synth-base than any of his previous releases, but he is careful not to let that tactic overshadow the other instruments and overall "unplugged" mood of the work. "This is my acoustic album, but it's not really an acoustic album at all. That's just what it feels like, mostly. I'm Italian, so I guess this is an Italian rock record."