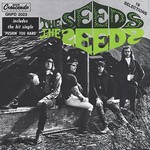 The Seeds
The Seeds (Double LP)

The Seeds debut studio album was originally released in 1966 on Crescendo. It peaked at 132 on the Billboard chart at the time, but in the time since has become an influential garage punk classic.

This is the 50th Anniversary special reissue with a deluxe tip-on gatefold sleeve, full colour booklet, and a bonus record of alternate takes and unreleased material.

Side 4
1. You Can't Be Trusted (take 3)
2. Evil Hoodoo (unedited take and intercut section)