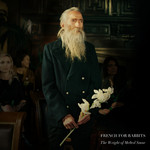 French For Rabbits
The Weight of Melted Snow

New Zealand dream pop band French for Rabbits are pleased to announce their second album The Weight of Melted Snow will be released in New Zealand on 10 March, 2017.

To introduce the album, they are sharing "One and Only" - a soliloquy to a changing relationship, written in a moment of realisation at the transitory nature of life. When Brooke Singer (songwriter, pianist) and John Fitzgerald (guitarist) chose for their personal relationship to end, they decided to keep writing music together. The resulting album is intimate and confessional, imbued with respect, understanding, and loss. Ultimately it is an album about breaking free and letting go.

The band's previous recordings include Spirits (2014) released on Lefse Records, and six song EP Claimed by the Sea (2012).