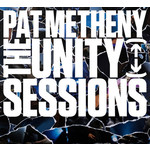 "Once you've heard Pat Metheny you will always recognise him, no matter what company he's in or what instrument he's playing, be it a simple acoustic guitar or some unlikely invention of his own. Beneath it all there's a frank, open-hearted tunefulness that keeps the music airborne. This double album, recorded at the end of a year-long tour by his Unity Band, is as polished and sophisticated as any, but moments such as the opening melody of This Belongs to You or the gradual unfolding of Born are just plain elegant. There's a similar quality about saxophonist Chris Potter's playing, and all four are so relaxed in each other's company that everything flows beautifully." The Guardian

"In 2012, guitarist Pat Metheny won a Grammy for his album Unity Band. That album featured his then newly formed group featuring saxophonist Chris Potter, bassist Ben Williams, and drummer Antonio Sanchez. A year later, the Unity Group returned with Kin, which found Metheny expanding the ensemble to include multi-instrumentalist Giulio Carmassi. Arriving in 2016, The Unity Sessions showcases that expanded version of the Unity Group live in a gorgeously produced one-off performance at New York's Black Box Theatre on the heels of their 2014 tour. Hoping to capture the synergy and collective dynamic forged over the yearlong tour, Metheny had the Unity Group set up at the Black Box just as they would for a live show. He then had the concert recorded and filmed, resulting in a unique document that is both studio recording and live performance. Here, we get cuts off both Unity Band and Kin, as well as songs culled from Metheny's lengthy career. These run the gamut from acoustic classical pieces ("Adagia") to moody, groove-oriented modal fusion cuts ("Roofdogs") to atmospheric world music-inflected numbers ("Come and See") and more. Elsewhere, the ensemble summons a palpable warmth on the ruminative ballad "This Belongs to You," combines John Coltrane-esque spirituality and African rhythms on "On Day One," and dives headlong into the expansive flamenco-steeped anthem "Rise Up." They even make room for a sprightly duo version of the jazz standard "Cherokee," featuring lively interplay between Metheny and Potter. Ultimately, while Metheny is the undisputed leader here, it's the thoughtful interplay of all the Unity Group's members that makes these sessions so involving." AllMusic.com