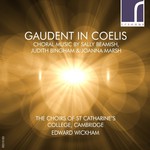 Following their crically acclaimed recording of contemporary carols on Resonus (Nova! Nova!), the Choirs of St Catharine's College, Cambridge, have joined together once more to record portraits of three composers to whom they have consistently returned ‒ Sally Beamish, Judith Bingham and Joanna Marsh.

Containing a number of world premiere recordings this album by the innovative College and Girls' Choirs of St Catharine's showcases the great and diverse wealth of recent new choral works, including works specially commissioned for the Choirs of St Catharine's by Beamish (St Catharine's Service) and Marsh (Missa Brevis: Collegium Sanctae Catharinae). Also included are a selection of Judith Bingham's choral re-imaginings - thought-provoking meditations that each segue into the famous choral work on which they are based.

"The St Catharine's girls and women exhibit a gleamingly blended tonal quality, and an articulate engagement with the Latin text…[the men] produce a pleasingly focused sound, with fluid variation of dynamics and an impressive agreement on how vowels should sound…[Edward Wickham] deserves credit: his firm, intelligent shaping of this enterprising and rewarding recital is a major factor" BBC Music Magazine, June 2017 ****

"These young voices bring a lovely freshness to the quality of the singing" Choir & Organ, May 2017 ***

Jackson: A ship with unfurled sails

Eight Visions: A New Anthology for Flute and Piano