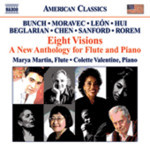 Born in New Zealand and now living in United States, Marya Martin plays eight commissioned works to add to the sizeable repertoire of 20th century scores for flute and piano.

Kenji Bunch opens the disc with the proactive Velocity, the love of arpeggios by eighteenth century composers being his inspiration, but here they are fragmented and often set against one another on the two instruments. Paul Moravec contributed Nancye's Song, in memory of Marya's mother, the writing going high on the instrument in a feeling of ecstasy. Derived from folk music, Chen Yi's Three Bagatelles from China West are contrasting and very likeable, the instruments used in a way unusual to Western ears. Tania Leon's dance-inspired Alma calls for nimble fingers, with Eve Beglarian's I will not be sad in this world having the unusual combination of pre-recorded singing voice with the flute used in a haunting counter-melody. We move to jazz as the incentive for David Sanford to compose Klatka Still, some tricky rhythms keeping the music in a light mood and much in contrast to the sombre atmosphere of Trace from the Hong Kong-born American, Melissa Hui. Finally to most instantly recognisable style of Ned Rorem in Four Prayers, a feeling of peace induced by the slow pulse of the opening prayer offset by the more animated second and the crushing piano chords of the third. Peace is again restored in the fourth. Martin's flute playing is technically outstanding with a silvery tone amplified by the resonant acoustic of the New York recording location. Colette Valantine is a highly responsive partner. Balance between the two is ideal.
David Denton

Beglarian, Eve
I will not be sad in this world