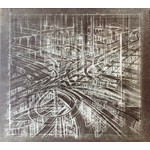 The Bug vs Earth
Concrete Desert

The Bug (Kevin Martin) and Earth have each spent over 20 years exploring sound worlds that - taken at face value - may seem incompatible. Martin has crafted his own sonic world in various electronic genres, from the bass-heavy world of Dub, to EDM, to Grime embracing Dancehall, Hip-Hop, Industrial and Reggae along the way. Carlson, meanwhile, became known through Earth's transfor­mation of Ambient and Doom Metal through the prism of Drone. Now, the two have teamed up for an entire album's worth of punishing stoner Electro-Drone.

"A colossal work of texture and atmosphere that rewards those who pay attention." - Crack

"Concrete Desert leaves space for the sounds to sink in, and you can really absorb the individual qualities of both artists." 7.4/10 - Pitchfork

"Meandering and spacious, steered by minimal guitar riffs that are amplified into grand aural textures. Concrete Desert is a Mammoth record". 4.2/5 - Resident Advisor

"An album of hope…expansive stokes by Martin and further shaded by some of the most mystifying motifs of Carson's career to date". - The Wire

Ø That was intense, I'm off to listen to some disco.