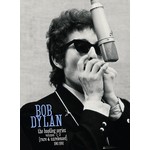 It is absolutely humbling, given the quality of the material on this 3CD, 58-song set, to think that these are the Dylan compositions that DIDN'T make the cut for his albums! Includes long-rumoured songs ("She's Your Lover Now"; "Blind Willie McTell"), alternate versions (of the songs on Blood on the Tracks, for instance), live cuts and more unreleased treasures. A must. Bob Dylan has always been incredibly prolific, only releasing a fraction of what he records. Such a policy has made him a prime target for bootleggers over the years, finally prompting this sanctioned 1991 triple-disc dive into the Dylan vaults. It consists of rare tracks, unreleased outtakes, early versions of classics ("Times They Are a-Changin'", "Like a Rolling Stone", "I Shall Be Released"), and alternate versions that sometimes cut the originals ("Idiot Wind"). A measure of Dylan's depth is his list of discarded songs ("She's Your Lover Now", "Blind Willie McTell", "Series of Dreams") that would be the crown jewels of most catalogues. These 58 tracks serve as a shadow history of one of our most important artists.

The set contains 58 tracks across 3CDs and a 58 page booklet.