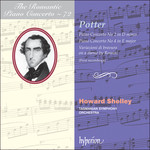 Volume 72 of Hyperion's Romantic Piano Concerto series comes to the rescue of yet another neglected figure with three first recordings courtesy of Howard Shelley and his Tasmanian forces. Composer, pianist, writer and educator (he was an early Principal of the Royal Academy of Music), London-born Cipriani Potter was encouraged by Beethoven and admired by Wagner.

"Shelley does [Potter] proud in this effervescent recording of two Potter concertos, one a semi-homage to Mozart, the other a much broader and more expansive corker...Another gem from Hyperion's Romantic piano concerto series." The Observer, 9th July 2017 ****

"[Potter's concertos] are conservative in style, but distinctively coloured through their prominent use of wind instruments, as well as occasional passages for solo violin and cello...The warmth and fluency of Howard Shelley's playing present the music in the strongest possible light...More distinctive than the concertos are the 'bravura' variations...which couple glittering virtuosity with wit and inventiveness." BBC Music Magazine, August 2017 *****

"What impressed most immediately - and more than any other element - was Howard Shelley's playing. Not for the first time, I was lost in admiration by his dazzling dispatch of the fantastically demanding writing in the outer movements of both concertos, the aural equivalent of someone mistakenly igniting a box of fireworks. Add to that his simultaneous and complete control of his fine Tasmanian players, I cannot think of another musician who is Shelley's equal in this dual role" Gramophone Magazine, August 2017