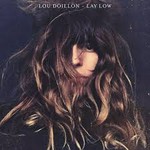 Lou Doillon's follow-up to 2012′s Places finds her in largely the same territory as that sultry record: elegant, undemonstrative, slightly gothic songs defined by her lovely voice. Part Beth Orton, part Keren Ann, it is a deep, confident groan, so forward in the mix that its breathiness is almost too intimate.

One development is the involvement of co-producer Taylor Kirk of Timber Timbre, who brings fuller, shimmering production to some of these sad, bluesy morsels, ensuring the LP's second half departs from the hushed, languid mood that is Doillon's natural style. A mournful collection with touches of mania, this should be played in the dead of night.

"More French pop of character and style comes from Lou Doillon, the daughter of Jane Birkin, sister of Charlotte Gainsbourg, sometime model and actress, and now finding her voice as a singer-songwriter with Lay Low. Doillon's drawled tones may suggest she was raised on a farm in Tennessee rather than in one of Paris's most chic arrondissements but this is an enjoyably straightforward album nonetheless, with songs of love and doubt played out against simple piano and guitar arrangements." - The Times