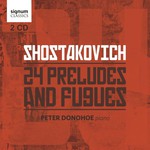 All 24 of the preludes and fugues were composed within several months, after Shostakovich was inspired by the performance of Tatiana Nicolayeva, whom he heard as a jurist for the Leipzig Bach Competition in 1951. Although doubtlessly inspired by J.S. Bach's own 48 Preludes and Fugues in his use of form and counterpoint, Shostakovich's compositions are all deeply original and rooted in his own enigmatic and ambiguous style, moving from charming simplicity to dazzling virtuosity.

"Donohoe treats these piano miniatures with utmost sincerity. His new recording of the complete set isn't introspective or showy; it isn't overly reverent or sensationalist. Above all his playing is frank, sometimes to the point of plainness...there is immense dignity and power in Donohoe's directness." The Guradian

"Donohoe's clean-cut and perceptive keyboard workmanship attests to a natural affinity for this composer's idiom, as numerous details bear out…one cannot dispute [his] high standards and musical intelligence, not to mention his superb and perceptive booklet notes" Gramophone

"Donohoe approaches the music with detachment and a good deal of poise, observing Shostakovich's sparse performing instructions to the letter. His control of fingerwork in the more densely textured movements, such as the frenzied quasi-atonal D flat major Fugue, is mightily impressive" BBC Music