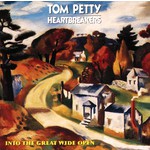 The Heartbreakers' sound has remained similar throughout their career, but they had never quite repeated themselves until here. Technically, it isn't a repeat, since they weren't credited on Full Moon, but Wide Open sounds exactly like Full Moon, thanks to Jeff Lynne's overly stylized production. Again, it sounds like a cross between latter-day ELO and roots rock (much like the Traveling Wilburys, in that sense), but the production has become a touch too careful and precise, bordering on the sterile at times. And, unfortunately, the quality of the songwriting doesn't match Full Moon or Let Me Up (I've Had Enough). That's not to say that it rivals the uninspired Long After Dark, since Petty was a better craftsman in 1991 than he was in 1983.

There are a number of minor gems -- "Learning to Fly," "Kings Highway," "Into the Great Wide Open" -- but there are no knockouts, either; it's like Full Moon Fever if there were only "Apartment Song"s and no "Free Fallin'"s. In other words, enough for a pleasant listen, but not enough to resonate like his best work. (And considering this, perhaps it wasn't surprising that Petty chose to change producers and styles on his next effort, the solo Wildflowers.) [Into the Great Wide Open was re-released on LP in 2017.] ~ Stephen Thomas Erlewine, Rovi

Side A:
Learning To Fly
Kings Highway
Into The Great Wide Open
Two Gunslingers
The Dark Of The Sun
All Or Nothin'

Side B:
All The Wrong Reasons
Too Good To Be True
Out In The Cold
You And I Will Meet Again
Makin' Some Noise
Built To Last