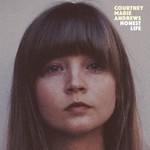 At just 16 years old, Courtney Marie Andrews left home in Arizona for her first tour. She travelled up and down the West Coast, busking and playing any bars or cafés that would have her. Soon after, she took a Greyhound bus four nights straight from Phoenix to New York to do the same on the East Coast. For a decade or so since, Courtney's been a session and backup singer and guitarist for nearly 40 artists, from Jimmy Eat World to Damien Jurado. She never stopped writing her own material, though. Picking up admirers like Jurado and Ryan Adams along the way, she has quietly earned a reputation as a songwriter's songwriter.

With plans to settle down for a bit and focus on her own songs, Courtney moved to the Northwest in 2011 to record her last full-length record On My Page. However, the record had hardly been released before she was on the road again performing other artists' songs, eventually leading her overseas to play guitar and sing with Belgian star Milow. At the tour's end, though, the other session players joined her to record her 2014 EP Leuven Letters in one take.

It was during this time that Courtney also wrote many of the songs on Honest Life. She found herself realizing the impact of growing up on the road and this constant reconciling between her and other's art and identity.

Side A:
Rookie Dreaming
Not the End
Irene
How Quickly Your Heart Mends
Let the Good One Go

Side B:
Honest Life
Table for One
Put the Fire Out
15 Highway Lines
Only in My Mind