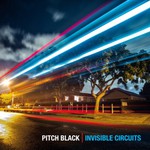 Invisible Circuits is remixes of tracks from Pitch Black's 'Filtered Senses' album, featuring collaborators from across the globe.

It has long been a Pitch Black tradition to follow up their studio offerings with a complementary remix collection. So 'Futureproof' was followed by 'Dub Obscura', 'Electronomicon' by 'Electric Earth and Other Stories', 'Ape to Angel' by 'Frequencies Fall' and 'Rude Mechanicals' by 'Rhythm, Sound & Movement'.

What makes these collections stand out is the depth and breadth of their co-conspirators and the unlikely avenues they take the originals down: Keretta's math rock mix of 'Bird Soul', Tom Cosm's epic version of 'Sonic Colonic', or Youth's psychedelic trance take on 'Melt' come to mind.