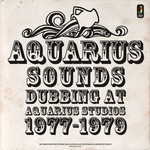 He was already producing records when he worked at KG's around 1969 as a DJ and record plugger with hits like Lloyd Charmers 'Shanghi' and 'African Zulu'. It was through his knowledge as a DJ at the various Sound System dances and the people coming into his record shop looking for these exclusive dubs that he hit on the idea of putting out a dub album.

It's around this time in 1971 that a youth by the name of Horace Swaby entered his shop carrying a melodica, which at this time was little more than a child's toy. Herman liked its sound and took a chance in recording Horace. His track 'I Man', an early cut to 'Cassava Piece', appears on this seminal album 'Aquarius Dub'. Although called Aquarius Dub, the tracks that made up this album were cut at Dynamic Sounds, Harry J's
and Randy's Studio 17. It was not long after this release that Herman opened the first ever twenty four track studio, Aquarius Studios.