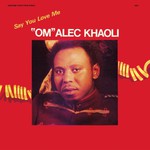 Re-issue on Awesome Tapes From Africa of "Om" Alec Khaoli, the musician behind Harari and Umoja.

Say You Love Me wasn't "Om" Alec Khaoli's first solo recording, but the 1985 EP solidified the bass player and songwriter's standing as one of South Africa's most consistently innovative pop auteurs.

He built a career on ubiquitous rock, pop and soul hits with ground-breaking bands like the Beaters, Harari and Umoja. But Khaoli's seemingly endless fountain of music continued outside these ensembles, where he usually played bass and contributed song writing and vocals. Khaoli released several successful solo works while he made records with Umoja and worked on other productions with friends.

He was the first South African to have a privately-owned studio. As black artists were forced to record during lunch breaks and didn't get sufficient access and time in the white-owned studios, having his studio allowed Khaoli to develop in his own way (hence his productive output during the 80's and early 90's, releasing 5 LPs with Umoja and 5 solo LPs, along with numerous singles and Eps).

There's something broad and dynamic about the almost epic pop sound Khaoli creates on Say You Love Me. Being the first South African to take control his recording process and thereby free himself from one of apartheid's many strictures; he took his vision of music to new realms and made timeless music for the dance floor in the process.