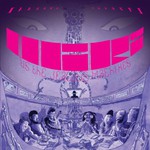 Quazarz vs. The Jealous Machines is the group's fourth album and extra-spatial twin to Quazarz: Born on a Gangster Star.

Quazarz vs. The Jealous Machines is a second, fully-realized album of new material that expands the Quazarz universe, and tells the tales of Quazarz, that sent sentient from some elsewhere. A wave warrior wielding his sonic sword. Posted to the turnt-up states of Amurderca here on the Gangster Star to chronicle, explore and enjoy as a musical emissary. He discovers a world where humankind's relationship with their tech-devices has become weirdly sensual, seducing a sedentary seamlessness with humans, while capturing and incarcerating the results of their imagination. Quazarz vs The Jealous Machines finds our protagonist with his dazzling cohorts rising a collective Nah to the device and the guilds that proliferate them.

Quazarz vs. The Jealous Machines was produced by the Palaceer Lazaro and Sunny Levine, recorded in Seattle at Protect and Exalt Labs: A Black Space and in Marina Del Rey at Dror Lord Studios, and mixed by Levine and Kamal Humphrey at Kamal's House Studio.