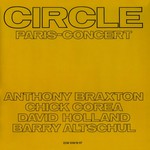 Circle was a band on fire with creativity. Chick Corea and Dave Holland had just left Miles Davis's band, keen to explore all parameters of new music in an improvised context. Anthony Braxton, equally inspired by Stockhausen and Coltrane, brought in new directions from the AACM. Barry Altschul's resumé included extensive work with Paul Bley. Together they were, for a while, matchless. Corea called the Paris Concert (recorded 1971) the realization of a dream. Melody Maker: "Paris Concert is evidence that here was one of the most excitingly talented bands of recent years, for these 94 minutes of music simply burst with vigorous invention."

Initially published in May 1972, vinyl is reissued as audiophile pressing taken from the original analog tapes.