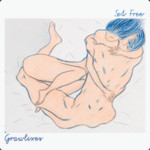 Grawlixes are an indie-folk duo who explore romance with dry wit and sharp tongue, crafting infectious songs about relationships and not being invited to parties. Continuing the lineage of artists who bring sadness to their sprightly melodies, Grawlixes' music often deals in the melancholy with self-deprecating honesty and beautiful boy-girl harmonies, sung by Robin Cederman and Penelope Esplin ( French For Rabbits, Prophet Hens and Sunley band).

The past few years have seen Grawlixes tour NZ multiple times, along with an extensive tour of Europe in late 2015, supporting (and playing in) label-mates French for Rabbits. Robin and Penelope filled the shoes of guitarist and bassist in French for Rabbits for the tour (Penelope even having to learn bass), clocking up sizeable stage hours along the way.

Afterward, Grawlixes converted a stuffy spare room into an emerald-curtained home studio and, between shifts and other band commitments, recorded their debut album "Set Free".