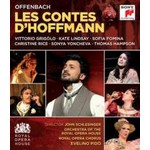 The final revival of this well-loved production by John Schlesinger provided the perfect vehicle for Vittorio Grigòlo as Hoffmann to display his wonderful voice and masterful acting, surrounded by an exemplary supporting cast, including Sonya Yoncheva in the role of Antonia, and Thomas Hampson as Hoffmann's arch rivals. The production at the Royal Opera House (November 2016) garnered very good reviews, especially for Vittorio Grigòlo.

"Vittorio Grigolo brought as much colour and vigour to the (title) role as possible, his wonderful freely projected voice growing in size and intensity as the evening progressed. He has become one of the most appealing tenors of our time, and he is reliable too. He had a choice set of non-lovers, but his muse/companion Nicklausse, sung by Kate Lindsey, outshone them all and was the female star of the evening, though Christine Rice, as Giulietta, the Venetian, was marvellous in her far too small role. Dudley's Venetian set may well outdo anything Las Vegas can offer in that line, and the music of that act, with the mysteriously profound Barcarolle, is the finest in the score." (Spectacular)

"Vittorio Grigolo acts with terrific fervour as both the drunken wreck of the exordia and the ingenuous patsy of the central episodes, making the conflicted character deeply sympathetic if faintly risible. Singing with security and clarity if not ideal tonal beauty, he tossed off the "Kleinzach" ballad with witty élan and rose expansively to the ardour of "Oh dieu, de quelle ivresse" and the duet with Antonia. He may be a little devil, but his is a rare vocal talent matched to a star personality." Telegraph