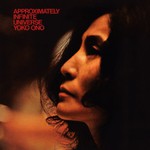 There's a fury at the core of Yoko Ono's 1973 rock opus Approximately Infinite Universe that was not apparent on previously recorded efforts.

Ono has always been a master of turning pain and sadness into art, but here, there's a clenched-fist intensity that sets it apart in her deep, unparalleled catalogue. Ono is angry. She proved that one can carry a boundless love for humanity and still be furious - furious at male/female relationships, at war, at your partner.

Meanwhile, on a sonic level, Ono ups the ante on the more centred rock-n-roll sounds she approached with 1971's Fly. Backed by members of New York band Elephant's Memory, with limited guitar contributions from John Lennon (listed as "Joel Nohnn"), the album is also one of the most traditional-sounding rock chapters in Ono's sprawling catalogue. There are moments here that absolutely rival Jersey legends the E Street Band, though of course Ono's vision leads her band down darker, more mystical paths than the E Street Band ever dared tread.

Approximately Infinite Universe is an essential and progressive piece of Ono's output, both in the advancements she made as a songwriter/conceptualist, and as a solidified statement of her staunch feminist role within the very male-dominated mainstream rock ghetto of the mid-1970's. Add this powerful feminist statement to the fact that the music business in 1973 was in its post-Woodstock explosion: A&R men, radio programmers, marketing execs, booking agents: men with a chokehold over the business, and Yoko's entry into it a complete question mark to them all. Ono absolutely intended to boggle the boys' club of the music industry. Fast-forward to today, and Approximately Infinite Universe stands as a template for powerful female artists to follow in the years ahead.