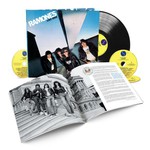 3 CD/1 LP set containing two different mixes of Leave Home, a remastered version of the original and a new 40th anniversary mix by original Leave Home album engineer Ed Stasium, along with a treasure trove of unheard recordings, and an unreleased live show recorded in 1977 at CBGB's.

Produced in a limited and numbered edition of 15,000 copies worldwide and comes packaged in a 12 x 12 hardcover book. In addition to the music, the set also features stories about the band by legendary former manager Danny Fields, as told to renowned music scribe Michael Azerrad, as well as details about making the album by Stasium.

The first disc features two different mixes of Leave Home, opening with a remastered version of the original stereo mix. The highlight is the new 40th anniversary mix of the full album, created by Stasium from the original multi-track tapes, and designed to better reflect the Ramones' raw power and beef up the sound. In the set's liner notes he writes: "Generally, the consensus was [the original] maybe sounded too clean, the guitars panned completely left-right detracted from the band's foreboding presence, and the reverb effects especially were a little excessive." The new 40th anniversary mix is also featured on the LP that accompanies this deluxe edition.

The second disc is overflowing with more than two dozen rare and unreleased recordings. It begins with rough mixes for 15 tracks recorded for Leave Home at Sundragon studio in New York. Most are missing elements that had yet to be recorded, offering fascinating insight into the band's recording process and the development of the album. Also included are "Sheena Is A Punk Rocker" and "Babysitter," both of which served as replacement songs on the US and UK versions of the album, respectively, when the band removed "Carbona Not Glue" from the track list shortly after initial release. The disc concludes with a combination of 18 alternate mixes and instrumental versions of all tracks from the album.

The final disc features an unreleased recording of the band's concert at CBGB's on April 2, 1977. The show took place a few months after Leave Home was released and includes live performances of album tracks like "Suzy Is A Headbanger," "Oh Oh I Love Her So," and "Babysitter," the latter of which was only performed live a handful of times, along with classics like "Blitzkrieg Bop" and "Now I Wanna Sniff Some Glue."