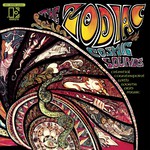 The Zodiac - Cosmic Sounds is a collaborative concept album on the theme of the signs of the Zodiac released by Elektra Records in November 1967. The basic idea for the album came from head of Elektra Records Jac Holzman.

The idea was fueled by the grand commercial success of the debut album by The Doors which was also released on Elektra Records. Jac Holzman hired Alex Hassilev (The Limeliters) to produce the album. Alex Hassilev asked Mort Garson, whom he had a production company with, to compose the music for the album and the lyrics were written by Jacques Wilson.

Different session musicians were brought in to contribute to the recordings most notably Paul Beaver who played Moog and other electronic instruments and narrator Cyrus Faryar. The music on the album is psychedelic rock with lots of spacy moog sounds, loads of different percussion instruments, West Coast guitar blues rock riffs, Harpsichord and organ. On top of that there´s the recitation of poems by folk singer Cyrus Faryar (whose voice is very similar to the voice of Jim Morrison). There´s no singing on the album only recitation of poems on the theme of the signs of the Zodiac.

Side A:
Aries - The Fire Fighter
Taurus - The Vuluptuary
Gemini - The Cool Eye
Cancer - The Moon Child
Leo - The Lord Of Lights
Virgo - The Perpetual Perfectionist

Side B:
Libra - The Flower Child
Scorpio - The Passionate Hero
Sagittarius - The Versatile Daredevil
Capricorn - The Uncapricious Climber
Aquarius - The Lover Of Life
Pisces - The Peace Piper