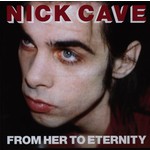 Nick Cave & The Bad Seeds
From Her To Eternity (LP)

From Her to Eternity is the debut studio album by Nick Cave and the Bad Seeds, originally released on 18 June 1984.

Fourteen classic NC & TBS albums will be reissued & available on heavyweight 180g vinyl for the first time. All 14 albums have been remastered, overseen by former Bad Seed and founder member Mick Harvey. Each album has been crafted to reflect the original release from the cover to the printed inner sleeves.

First released on the 18th June 1984, recorded in London studios The Garden and Trident, From Her To Eternity marked the debut of Nick Cave & The Bad Seeds after the break-up of Nick Cave's former band The Birthday Party. Features Blixa Bargeld, formerly of Berlin's Einstuerzende Neubauten, on guitar. Said Cave at the time "I don't really think he knows how to play in the conventional sense at all. He just makes these incredible sounds"

Side A:
Avalanche
Cabin Fever!
Well Of Misery
From Her To Eternity

Side B:
Saint Huck
Wings Off Flies
A Box For Black Paul