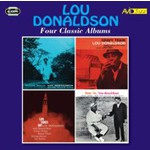 As an alto saxophonist, Lou Donaldson seemed to spend his early jazz career trying to extricate himself from being styled as a copyist of his acknowledged hero and major influence, Charlie Parker. A tricky thing to do of course, as Parker was such a huge presence on the jazz scene at the time, but as his career developed, Lou did begin to create his own, more blues orientated sound. Donaldson's musical training, as was fairly common at the time, came from his time spent in military service. However by 1952 he had moved to New York to begin his recording career with Blue Note records. Although perhaps not a jazz innovator in the Parker mode, Lou Donaldson certainly had developed his own hard driving, bluesy, bop sound by the time he started recording as leader. Artists he has worked with include; Art Blakey, Clifford Brown, Horace Silver, Thelonious Monk, Sonny Clark, Curtis Fuller, Donald Byrd, Art Taylor, Grant Green and Milt Jackson. Here Avid present four of his best from Blue Note.