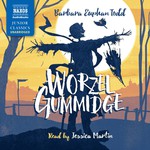 Regarded as one of the most popular children's novels, Barbara Euphan Todd's Worzel Gummidge follows an animated scarecrow who causes chaos and mayhem wherever he goes. The series is perhaps best known through its 1980s television adaptation, and is given new life in this exciting reading by Jessica Martin.

Spending their summer holidays with Farmer Braithwaite and his wife in Scatterbrook, John and Susan come across a particularly lifelike scarecrow in a nearby field. That evening, much to the children's surprise, the scarecrow makes an appearance in the Braithwaites' kitchen to warm himself by the fire. He is Worzel Gummidge and he is no ordinary scarecrow. His tendency to cause mayhem wherever he goes sparks a series of mishaps and adventures, often with hilarious results. This is the first of the Worzel Gummidge novels written by Barbara Euphan Todd, originally published in 1936.