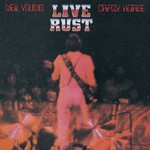 All the kudos Neil Young earned for Rust Never Sleeps he lost for Live Rust, the double-LP live album released four months later. Live Rust was the soundtrack to Young's concert film Rust Never Sleeps (he had wanted to give it that title, but Reprise vetoed the idea, fearing confusion with the earlier album), and likewise was recorded October 22, 1978, at the Cow Palace in San Francisco. But much of the Rust Never Sleeps album had been recorded on the same tour, and Live Rust repeated four songs from that disc; besides, since Young had released the career retrospective Decade in 1977, critics felt he was unfairly recycling his older material and repeating his new material.

In retrospect, however, Live Rust, now a single 74-minute CD, comes off as an excellent Neil Young live album and career summary, starting with the early song "Sugar Mountain" and running through then-new songs like "My My, Hey Hey (Out of the Blue)" and "Powderfinger." Young is effective in both his acoustic folksinger and hard-rocking Crazy Horse bandleader modes. The various distractions of the concert itself and the film, such as the pretentious props and cowled roadies, are absent, and what's left is a terrific Neil Young concert recording.
4.5 / 5 All Music Guide.