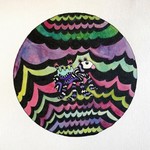 Swim Inside the Moon is a record by 24-year-old Angelo De Augustine. This second full-length of Angelo's career captures a sound he's been looking for since he started playing music a decade ago.

Shortly after the 2015 release of Spirals of Silence, his first record, Angelo toured extensively but caught whooping cough on the last show of the tour. The illness debilitated Angelo for months. He feared he might permanently lose his voice, or if it came back, it wouldn't sound the same.

Unable to sing or sometimes even speak, Angelo instead focused on songwriting. "I wasn't thinking much about making a record," says Angelo. This gave Angelo a lot time to focus on songwriting and sound. Although Angelo had previously recorded in studios, he felt like that environment didn't capture the ambience he wanted for his music.

Angelo's voice did recover, and this time he set-up his equipment by himself, in his home.

"A sound behind the voice," says Angelo, who recorded all of this record in his bathtub using a reel-to-reel machine and a single Shure SM57 microphone. "I noticed that when you sing off a reflective surface you hear two voices. I was compelled to isolate that voice and bring it more to the front of the songs because in many ways I feel more connected to and comforted by that voice following me."

Listeners might hear Nick Drake's intricate arpeggiated guitar parts, Elliott Smith's pure vocals, or, at times, a likeness to the soulfulness of artists such as Vashti Bunyan, Judee Sill, and José González. But for Angelo's part, he found this sound on his own terms. As to what these songs mean, well, that's harder to say. "I couldn't tell you," says Angelo. "I get into this place, and then I wake up with a song instead of a dream."

Side A:
Truly Gone
Haze
More Than You Thought To Use
Crazy, Stoned, and Gone
Fade

Side B:
On My Way Home
I'll Wait For The Others
Dreaming Of The Moon
I Hope That All Of Your Dreams Come True