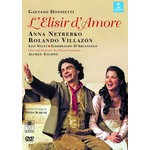 Rolando Villazón as Nemorino exhibits a real gift for comic acting, manipulating his rubber face into dozens of hilarious poses, flawlessly turning stock comic gestures into laugh-out-loud moments, and even juggling apples with the panache of a circus performer. More important, he uses his lyric tenor to sing the part with impressive subtlety, suggesting Nemorino's desperation while singing of his love for Adina. His big show-stopper, "Una furtiva lagrima," features melting pianissimos and a breathtaking decrescendo in its final phrase. Netrebko's Adina is every bit as good, with deft acting and a lovely lyric soprano voice that makes you understand why she's the only girl for Nemorino.

"The Vienna State Opera's presentation of Donizetti's L'Elisir d'Amore in April 2005 is as good as it gets. The dream couple of opera, Rolando Villazón and Anna Netrebko, are both in fabulous voice, and are superb actors as well. Villazón shows remarkable acting ability, even juggling three apples! His "Una furtiva lagrima" stops the show and is encored. Ildebrando D'Arcangelo is outstanding as Dulcamara, veteran Leo Nucci shines as Belcore, and what one can one say about Netrebko-she is delightful in every way, totally secure vocally. The remainder of the cast is first class. Otto Schenk's production and direction includes lots of dancing, frolicking and stage action. Karina Fibich's video direction is excellent, including some effective shots from a camera above the stage. Excellent sound with just one debit-sometimes singers are too recessed. All in all, this is a superb release, and highly recommended." (ClassicalCDReview.com)

"I don't know what else was playing in Vienna in April 2005 - maybe there was an Austrian production of Les Miz, or perhaps Cirque de Soleil. In any event, I wager that this production of L'Elisir d'Amore still was the best show in town. This opera's tunefulness and fun are not far removed from the best of Broadway, especially when it is performed as it is presented here." ClassicalNet