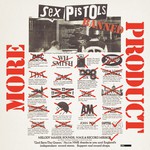 Originally released as an album in 1979, Some Product is a compilation of Sex Pistols' interviews recorded between 1976 and 1978. A later CD version of the album was deleted sometime during the mid-1990s.

Now, More Product has been expanded to a 3-CD set by including the rare BBC Radio 1 Rock On interview from 1977 (CD2) and the previously unreleased; Radio Forth and Radio Metro interviews recorded that same year (CD3).

Expanded to include two bonus discs of additional unreleased interviews.

Disc 1
1. The Very Name 'Sex Pistols'
2. From Beyond The Grave
3. Big Tits Across America
4. The Complex World Of John Rotten
5. Sex Pistols Will Play
6. Is The Queen A Moron?
7. The F**king Rotter