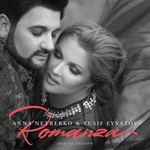 Romanza is a double album and is completed by a bonus disc of popular classical arias from Anna's extensive DG catalogue.

Romanza is not only Anna Netrebko's first duet album with husband Yusif, but also her first foray out of the realm of traditional core repertoire. Producer Igor Krutoy wrote all 18 album tracks with Anna and Yusif in mind. Many years of working together closely and a one of a kind friendship that stems from his collaboration with Anna and Yusif allowed Igor to write love songs that not only perfectly match their voices, but also are an homage to love in general.

On her previous album Verismo (released September, 2016) Anna Netrebko led her listeners through the revolutionary opera style of the 1890s to the 1920s and performed the works of musical masters such as Francesco Cilea, Umberto Giordano, and Giacomo Puccini. The album earned Netrebko a German Echo Klassik award for "Vocalist of the Year" and a Grammy nomination for "Best Classical Solo Vocal Album."

Anna met her husband, tenor Yusif Eyvazov, when they starred together in Manon Lescaut at the Rome Opera in March 2014. Since their wedding in December 2015, the couple has appeared in concert and on the opera stage together worldwide. She and Yusif open La Scala's season on December 7, 2017 in Andrea Chénier; it will be her role debut as Maddalena.

Dvorak:
Mesícku na nebi hlubokém 'Song to the Moon' (from Rusalka)
Songs My Mother Taught Me, Op. 55 No. 4

Bellini:
Eccomi in lieta vesta...Oh! quante volte (from I Capuleti e I Montecchi)