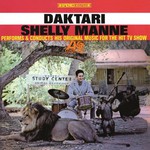 Daktari is an album by drummer Shelly Manne recorded in 1967 featuring music from Daktari. The heavy use of the marimba with various percussion instruments serves the score well and makes it a huge success.

Steely Dan guitarist Walter Becker was a fan of the album's 'vaguely African' music, sounding like it came from "Hollywood session players" rather than actual Africans. In the late 1990s, Becker modelled a percussion sequence after this style on the song "Two Against Nature" released on the Steely Dan album of the same name.