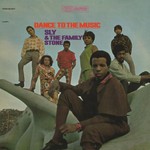 Sly & The Family Stone
Dance To The Music (LP)

Sly & the Family Stone came into their own with their second album, Dance to the Music, released in 1968. It contains the Top Ten hit single of the same name. "Dance to the Music" peaked at #8 in The Billboard Hot 100, and reached 9th place in the R&B Singles of 1968. The song propelled Sly & The Family Stone into the stratosphere. This seminal album helped lay the groundwork for the development of Funk music.