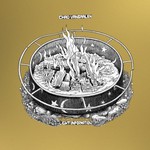 "VanGaalen is very good at making eccentric, homespun indie-rock records, and with Light Information he has made yet another." - Paste Magazine

"What makes these songs truly surreal (and ergo, sublime) are his wacky scenes, both monstrous and endearingly human all at once." - Drowned In Sound

For an album that's about "not feeling comfortable with really anything," as VanGaalen says, Light Information is nonetheless a vivid, welcoming journey through future worlds and relentless memories. The rich soundscapes and sometimes jarring imagery ("I'll be the host body, yes, for the parasitic demons. They can eat me from the inside out, I already hear them chewing.") could only come from the mind of a creative polymath.

An accomplished visual artist, animator, director, and producer, VanGaalen has scored television shows, designed puppet characters for Adult Swim, directed videos for Shabazz Palaces, Strand of Oaks, METZ, Dan Deacon, and The Head and the Heart, and produced records for Women, Alvvays, and others.

While alienation has always been a theme of VanGaalen's music, Light Information draws on a new kind of wisdom-and anxiety-gained as he watches his kids growing up. "Being a parent has given me a sort of alternate perspective, worrying about exposure to a new type of consciousness that's happening through the internet," he says. "I didn't have that growing up, and I'm maybe trying to preserve a little bit of that selfishly for my kids."

As always, VanGaalen wrote, played, and produced all of the music on Light Information (save Ryan Bourne's bass part on "Mystery Elementals" and vocals on "Static Shape" from his young daughters Ezzy and Pip), and designed the cover art. The product of six years' work, going back even before 2014's Shrink Dust, Light Information emerged from the experimental instruments that fill VanGaalen's Calgary garage studio. Among them is a beloved Korg 770 monosynth, which VanGaalen coveted for years before fixing one up and devoting a lot of recent energy to recording "duets" with it. One of these, "Prep Piano and 770," is the lone instrumental on Light Information, more atmosphere and chord bursts than the rest of the album's hooky rock narrative.