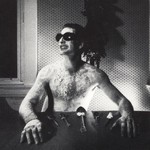 This LP pressing is the first time Uptown Avondale has been widely released on vinyl (its only previous vinyl pressing was a short European run in 1992).