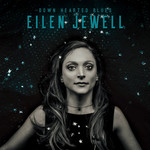 Honesty, confidence, and respect permeate Eilen Jewell's music, dating back to her self-released Boundary County album in 2006. After releasing five albums of critically acclaimed original songs, the reigning "Queen of the Minor Key" is taking a moment to shake hands with the blues. Eilen Jewell's new collection of twelve rare, bold blues and R&B covers adds to her potent mix of classic country, folk, and early rock 'n roll inspired original music. From the barrelhouse power of 1920's Bessie Smith to the electrified sounds of 1960's Betty James, blues music has always been a strong influence Eilen Jewell.

On Down Hearted Blues, Eilen and her long-time road band (Jerry Miller, Shawn Supra, Jason Beek) rip through greasy versions of dark blues like Charles Sheffield's "It's Your Voodoo Working", Willie Dixon's "You Know My Love", and Albert Washington's "One of These Days". The band also strips down the sound, trading in drums and electric instruments for washboards, mandolins, and banjos to cover songs like Memphis Minnie's "Nothing in Rambling", Bessie Smith's "Down Hearted Blues", and Moonshine Kate's "Poor Girl's Story".