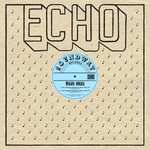 New 12" that features some fresh takes on 'The Sweetest Meditation' - the second single from Lord Echo's latest hit record 'Harmonies'.

This 12" contains a new club-friendly mix cooked up and trialled by the Lord himself on a recent European DJ excursion, a remix by long-time collaborator, artist and record fiend Julien Dyne, a Black Ark style disco-dub of a rare early version as well as the original mix heard for the first time with the unmistakeable fidelity of a 12 inch record spinning at 33 revolutions per minute - higher highs, deeper lows, greater dynamic range.