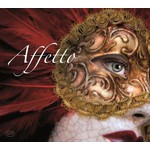 Praised as 'inspired programmers' by Metro Magazine, early music ensemble Affetto were formed in 2010 to explore the lesser known chamber music of the Baroque and Renaissance. The five members of Affetto are all early music specialists, leaders in their respective fields, Kiwis, overseas trained, all playing authentic instruments & all hopelessly passionate about early music. This is an album of Italian and Spanish songs about love and life, performed with drama and flare.