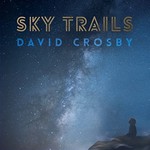 Sky Trails is a full band affair produced by David's son James Raymond, and is another volley in the 75-year-old's incredible late period resurgence.

The album, his third solo album in four years, is released only one year after Crosby's critically acclaimed album Lighthouse, which Rolling Stone says is his "finest solo album since his melancholy 1971 masterpiece If I Could Only Remember My Name".