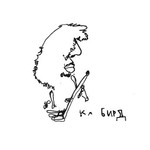 Ka Baird is a multi-instrumentalist and vocalist living and working in NYC. She is best known as one of the founding members of experimental psychlings 'Spires That In the Sunset Rise'.

With the release of Sapropelic Pycnic, Ka manifests an evolving selfhood, expanding upon the essence of her first two albums' artist name, while replacing and thus becoming that name on her own. "Sapropel" is a contraction of the ancient Greek words sapros and pelos - putrification and mud. "Pycnic" draws from pyknos - dense; stocky. This wordplay is meant to suggest a physical consumption, ingesting of the nutrient-rich mud found at the bottom of seas, lakes and rivers. Very much akin to the gorging of this metaphorical sludge, on Sapropelic Pycnic, Ka Baird imbibes sounds to provoke unseen forces within the wilds of her own unconscious, then brings them into the play.