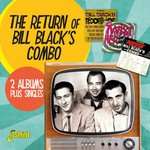 Jasmine's first Bill Black compilation, 'Smokin' (Jasmine JASCD 709) released in 2012 was a major success. It covered all of the group's recordings from their formation at HI Records in 1959. Volume 2, 'The Return of Bill Black' covers just their activity in 1962 and features their next two consecutive LPs 'Movin' and 'Bill Black's Record Hop' (aka 'Let's Twist Her') plus four sides released on 45s during 1962.