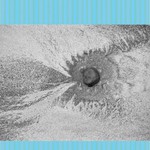 New Energy follows Four Tet's 2015 album Morning/Evening, which consisted of two lengthy tracks that took up entire LP sides. Prior to that, he released the more traditionally arranged Beautiful Rewind in 2013.