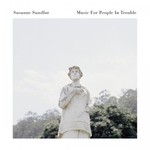 It would have been easy for Susanne Sundfør to follow up her breathtaking album "Ten Love Songs" with "Ten More Love Songs," if only it hadn't been impossible. "Ten Love Songs," after all, had been her third No 1 album at home in Norway, and her first to gain widespread attention abroad, winning a slew of gushing reviews in the UK and US. It was impossible because Sundfør had a breakdown as she completed "Ten Love Songs" in 2014, and pressed the reset button on her life: she travelled around the world, she changed homes, she completely altered the way she worked.

The result is "Music for People in Trouble," her fifth "proper" album, and her first for Bella Union, home to Father John Misty, Ezra Furman, John Grant, Van Dyke Parks and many of pop's other great individualists. It's a stark and beautiful album, often stripped back to Sundfør's wonderful voice accompanied by piano or guitar, and it was inspired by the fears Sundfør felt - for the world and for herself - in the wake of her last album.