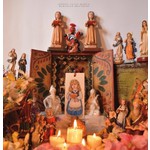 Meridian Brothers' sound is a huge palette of influences and inspirations. Drawing from traditional Latin rock (including Colombian, Argentinian and Mexican) as well as Brazilian tropicalia, for this album Alvarez incorporates string instruments - in particular the cello, both bowed and plucked - a timbre rarely used in his previous works.

For fans of: Ondatrópica, The Heliocentrics, Frente Cumbiero, Los Pirañas.