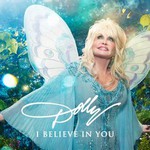 Dolly Parton
I Believe In You

"I Believe In You", is the first ever album written and recorded for kids and those young at heart from Dolly Parton.

"My first album was released 50 years ago and it's been an amazing 50 years since then. I am very excited that now I'm coming out with my first children's album in all of those 50 years," says Dolly Parton.

Dolly Parton is the most honored female country performer of all time. She has had 25 songs reach #1 on the Billboard Country charts, a record for a female artist. She has 41 career top 10 country albums, a record for any artist, and she has 110 career-charted singles over the past 40 years. All-inclusive sales of singles, albums, hits collections, paid digital downloads and compilation usage during her Hall of Fame career have reportedly topped a staggering 100 million records - which includes sales of her 2016 chart-topping disc "Pure & Simple", her first number one album on the Billboard Country Album charts in twenty-five years.