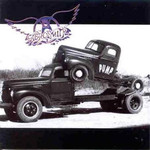 Following the triumphant comeback success of PERMANENT VACATION, Aerosmith's next album, PUMP, proved to be an opportunity for the band to cut back on the army of songwriters that had lent its hand on the prior album. Most of the material on 1989's PUMP was generated from within the band, and Jim Vallance and Desmond Child are the album's only outside collaborators.

Sober and fully functional, Aerosmith used the momentum of success to churn out songs that tapped into the band's libidinous instincts, like "Young Lust" and "Love in an Elevator." The band also took a chance by including a Steven Tyler/Tom Hamilton hit about incest ("Janie's Got a Gun"), a semi-autobiographical rant about the evils of drug use ("Monkey on My Back"), and a bluegrass/Indian instrumental ("Dulcimer Stomp").

Although the brassy "The Other Side" and the power-ballad "What it Takes" became top-30 hits, it was with lesser-known songs like the Stones-esque pop nugget "My Girl" that Aerosmith showed it was still capable of being America's top rock & roll band.

Side One:
Young Lust
F.I.N.E.
Going Down/Love in an Elevator
Monkey on My Back
Janie's Got a Gun

Side Two:
The Other Side
My Girl
Don't Get Mad, Get Even
Voodoo Medicine Man
What It Takes