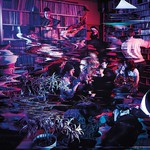 Zach Saginaw is accustomed to working with other musicians -- he played drums for School of Seven Bells and contributed electronics to Dave Douglas' High Risk, for starters -- but his recorded activity as Shigeto has largely been solitary. That changes with The New Monday, the producer's first album since 2013's No Better Time Than Now. After the Intermission EP in 2015, Saginaw started a label with his brother, recorded an album with Danny Brown associate ZelooperZ (as ZGTO), and established a weekly DJ night with members of his musical family at a Detroit wine bar. That sense of community carries over to Saginaw's third Ghostly International full-length, an album with a cast of ten vocalists and instrumentalists in support of Saginaw's most diverse bundle of tracks yet. Nothing here has the fidgety, beatific quality of past highlights like "Huron River Drive" and "Detroit, Pt. 1," but the free-spirited mix of styles is inviting in its own way. Even the two tracks featuring waggish wordplay from ZelooperZ -- the gnashing "Barry White" and lurching fever dream "A2D" -- differ from ZGTO and aren't straight hip-hop, slathered in acid-house zags, dotted with a clinking crib-mobile melody, and brightened with Saginaw's familiar thumb piano. A handful of efficient house tracks bear the inspiration of metropolitan Detroit and Motor City-proper figures like JTC, Theo Parrish, and Moodymann. "Ice Breaker" deals out stern, menacing jakbeat. "Detroit, Pt. 2," one of three tracks featuring Marcus Elliot's silvery tenor saxophone, bumps and knocks, while "There's a Vibe Tonight" slinks and slides with Kaleena Zanders making like Chaka Khan. Saginaw ventures into heady, twitching footwork for "Don't Trip," then closes the album with a shadowy showcase for Elliot. It's all somehow pulled off without coming across as aesthetically erratic.