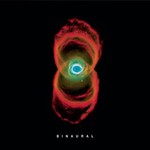 Binaural is the sixth studio album by from Pearl Jam, released May 2000.

The music on the record featured an experimental sound, evident on songs that used binaural recording techniques. The atmospheric tracks, mostly featuring sombre lyrics dealing with social criticism, led the band to convey these themes with images of nebula in the album artwork.

SIDE B
1. Nothing As It Seems
2. Thin Air
3. Insignificance