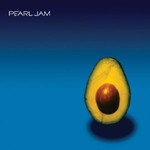 Pearl Jam (sometimes referred to as The Avocado Album) is Pearl Jam's eighth studio album, released May in 2006.

The music on the record was proclaimed as a return to the band's roots, with an emphasis on up-tempo songs with an aggressive sound. The song lyrics are mostly told from the point of view of characters and deal with the socio-political issues in the United States at the period, such as the War on Terror.

This has been newly remixed by Brendon O'Brien for this release.

SIDE B
1. Marker In The Sand
2. Parachutes
3. Unemployable
4. Big Wave

SIDE B
1. Inside Job